Wolverhampton Central Youth Theatre (CYT)  director Jane Ward was presented with her MBE by the Queen (nice picture in the Express & Star here http://bit.ly/IpHa0x) to recognise 30 years of  service to Drama and the Community of Wolverhampton.

Jane, of Bradmore, Wolverhampton, has led CYT since founding it in 1983, winning awards and leading the group to represent the city throughout Europe, including Austria, Ireland, Italy, Russia, Lithuania, Germany, Belgium, Latvia, Hungary and the Czech Republic.

Yesterday (Thursday 28th November) she was at Buckingham Palace to receive her award from the Queen before Jane and ex-members working in theatre, film and TV had a celebratory meal at the British Academy of Film and Television Arts (BAFTA).

It was hosted  at the BAFTA195 Restaurant by BAFTA  member and ex-CYT member Liz Griffiths, who dressed the set of new Richard Curtis Film “About Time”.

Other ex-CYT members included lighting designer Tim Routledge, who programmed the opening and closing ceremonies of the Olympics and Tom Parry and Ben Clark stars and writers of BBC3 sitcom Badults.

This year CYT, working with city 8-25 –year-olds, represented the United Kingdom at the World Amateur Theatre Festival in Monaco, performing their own adaptation of the play Burnt By The Sun in the Salle Garnier Opera House in Monte Carlo.

CYT has also staged city-based festivals and exchanges with groups from across Europe, the latest being the Everybody Dance Now festival in 2011 which was a Cultural Olympiad Inspired project, culminating in a festival involving theatre groups from Austria, Italy, Lithuania, the Czech Republic and Poland.

CYT, currently based at the Newhampton Arts Centre, Dunkley Street, Whitmore Reans, Wolverhampton,  is now under threat from financial cutbacks being imposed on Wolverhampton City Council, as part of the Government’s austerity programme.

Jane said: “To receive an MBE is a tremendous honour for myself, CYT and the city.

“It’s a bitter sweet irony that I am receiving the award at this difficult time for the council and ourselves, but I  hope that the award will help people to appreciate just how hard we have worked for 30 years, the hundreds of thousands of pounds we have raised and spent in the City, and help we have given to more than two thousand young people to acquire skills and abilities which have served them well in their careers – not just in the entertainment and theatre industry – but in all walks of life.

“For example, recently as we were in Leicester Square getting a national film award at the National Youth Film Festival Awards for our film Salt ‘n’ Malt.” 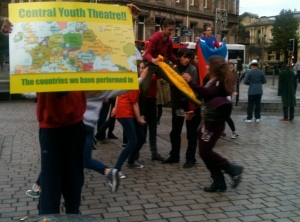 More than sixty CYT members took part in a flash mob in the city’s Queen Square on Saturday, with music from each of the three decades that the group has operated in.

CYT assistant Holly Phillips said:   “Preparing the flash mob was really fun and we wanted to show the people of Wolverhampton just how much CYT means to young people – and why it’s important it gets support to carry on providing more amazing opportunities for decades to come, particularly at this time when our Director is being honoured for her achievements.

“CYT has faced many adversities over the years, and Jane had to work like crazy to keep it going. Members are all immensely proud of her going to the Palace.”